We have no idea how the BBC will edit the piece, but we urge you all to watch it tomorrow (Friday) on BBC2 at 8.30pm.  It should be good.

We know it will show how a census is being done, and has interviewed Alastair Fraser who supports our claim that the boar numbers are very low through overculling and an unknown element of poaching.

Despite pre-filming talks between the BBC and Friends of the Boar, we feel that their promise to talk about issues of killing piglets and sows with young will not be aired "due to political reasons" (quote).

We predict the following based on the fact that the BBC suddenly didn't want to ask questions of how we know numbers of boar are low, nor any questions concerning the cull data that PROVES the FC are killing piglets and juveniles and that the average weight (age) of boar is falling drastically.  Maybe the presenters will talk about this on-air?

We suspect the program will allow the Forestry Commission to decieve the public with half-truths on boar numbers. We know that the FC persist in the deceit that the current cull of 139 boar this year proves there must be many boar in the forest (vastly more than we claim), and without continued and increasing culling the "problem" of over-population will only get worse.

We suspect the Forestry Commission will not explain how overculling promotes breeding spurts due to compensatory rebound, nor will they explain that 50% of all boar culled are juveniles.  They will not explain that the cull so far achieved does not represent a snapshot of numbers, but a result of continual killing and rebound breeding in response.  This is why the boar need a closed season.  A closed season will prevent an over-population of boar and susceptibility to disease.  The FC's reluctance to follow a closed season is possibly a reluctance to allow boar numbers to drop - do they simply want to keep the culling high, the meat traders happy and the balance sheet improving?

We are sure they will continue to spread the popular myth that boar breed all year round and therefore a closed season is not "practical".  They will not explain that boar ONLY breed all year round due solely to the constant killing of piglets and juveniles that bring adult females straight back into oestrus.  They will not explain that constant year-round culling is unatural and unhealthy for the boar population.

Indeed, if asked, we expect the Forestry Commission to deny they kill piglets and juveniles at all!  This is their policy statement and are their orders from Defra.

We would like to remind Autumnwatch and people reading this of Kevin Stannard's (Deputy Surveyor) admission that killing piglets is necessary and ongoing in order to achieve his own arbitrary cull target based upon nothing but sticking a wet finger in the breeze.  And culling of piglets is becoming necessary because this is the dominant age group left within the boar population thanks to over-culling and non-selective numbers-based "management"! 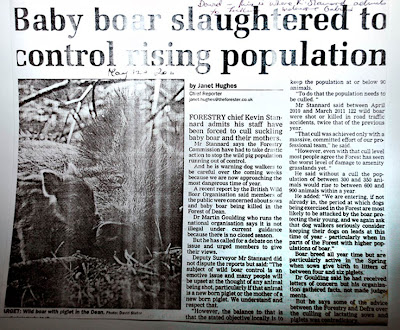 Please click on image to read text
We would also like to draw attention to todays revelation about the way in which some Forestry Commission rangers have a deplorable attitude to the public who appreciate and adore the boar, the way they have a willful neglect of public safety, their willingness to scare the public, their willingness to display weapons in public, and also continue to pursue the celebrity Black Sow and piglets with the intention of an easy kill.
All this is despite personal assurances to Friends of the Boar that the harmless Black Sow and her piglets will no longer be targeted.  Of course, this assurance was before Autumnwatch came to film the Forestry Commission as "managers" of our wild animals. 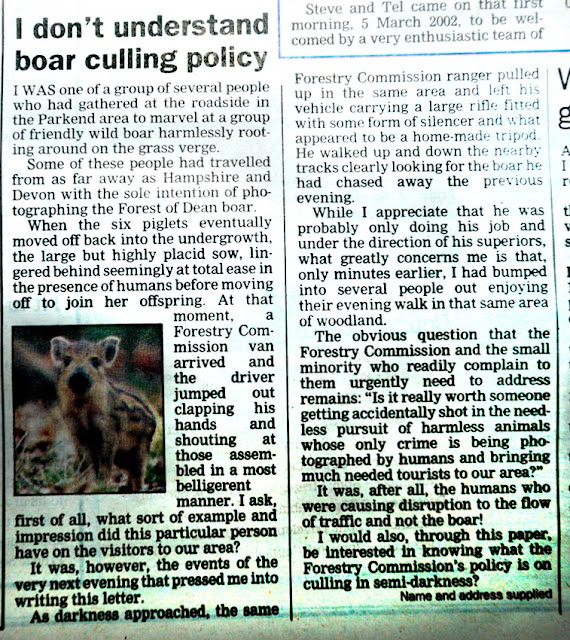 Forester Newspaper 6th October 2011:
EYEWITNESS ACCOUNT OF THE FC INTENTION
TO KILL PIGLETS AND A TAME BLACK SOW﻿
We will update this with an analysis of the show after it is aired tomorrow.  Watch this space as they say!