BBC WILDLIFE MAGAZINE on the Forest of Dean Boar


A really good article on the forest's wild boar has appeared in BBC Wildlife magazine this month.

Ben Hoare, the author, interviewed Friends of the Boar at length in November and we are delighted to see quite a lot of our information got through to print.

It was refreshing to see some positive boar facts in the media for a change, such as the University of Worcester's recent survey revealing that a "huge majority of respondents feel boar are beneficial."

Sadly we see more deceit from Ian Harvey at the Forestry Commission, and also from Robin Gill at Forestry research.

They insinuate the boar can breed all year round because of the forest's "plentiful food and mild climate."  This is wrong because because boar do not breed year round (unless mismanaged), and the food supply dwindles in the winter - hence the need for them to root the roadsides.

Another untruth of Ian Harvey is that wild boar have 6-10 piglets, "since they are hybrids between wild boar and farmed pigs".  Total nonsense, and he knows it.

This they know to be untrue and are purposefully deceiving the public.

No wild boar in the Forest of dean has been seen to have more than 7 piglets in 11 years.  DNA tests have shown that all boar, all across Europe and Asia have "farmed boar" genes in them, but these genes are recessive.  The boar are not feral anymore and act and look like true wild boar despite the tiny element of domestic genes (that all the boar across Europe also have).

What Ian Harvey tries to base this pseudo-fact on is a post-mortem finding in a sow a few years back that had 12+ corpus luteum or "yellow bodies".   This is the structure that bore the egg in the ovary and was left empty after fertilisation. These can equate to embryos.  But again, Harvey quotes from domestic pigs for they have a greater correlation between corpus luteum and piglet number.   But 12+ corpus luteum in wild boar does not mean that 12 piglets were to be born  The sow produced 12+ eggs, of which 50% were likely to become embryos.

We also note a councillor claims the boar in Ruardean primary School in 2008 HAD to be shot, when actually it did not.  We have covered this previously, with a photo of said boar happily munching on windfall apples in a corner of the school field doing no harm to anyone.  The children, as the councillor rightly states, were sad and shocked to see an innocent animal shot before their very eyes!

So as per usual, people with propaganda to spread and an ill-will towards wild animals get a say in opinion pieces, but we hope you will do your own study and find the truth.

We are glad, however, to see conclusive reporting that wild boar are actually good for bluebells.

We are also glad to read of 4 ways we can learn to live with the boar (better fencing, meat-fund, garden-angels/turf teams, contraception).

Actually, contraception may work but not the way the Forestry Commission wish using the dangerous non-species specific contraception administered via a feeding device.

We have been approached by a company who are willing to do this on the wild boar.  We hope to bring further news on this in the near future.

Please get a copy and read the rest yourself.  It is definitely worth a read.
Posted by Friends of the Boar at 23:24 No comments: 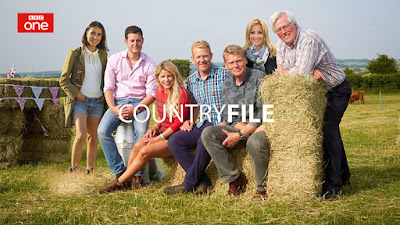 BBC Countryfile  aired a programme on 13th December 2015 that covered some of the issues of wild boar in the Forest of Dean.  Friends of the Boar were consulted on the topic and David Slater agreed to try and help find some boar for them to film and to appear on the programme too.

We had 3 days to find some boar, and that proved to be quite tough.  Surveying the entire Forest it had become very clear that boar numbers were now terrifically low, perhaps less than 70 left.  Boar rootings were massively reduced compared to more recent years, as were all other signs.  It reminded us of 2008-9 in terms of rootings, when the population was put at around 60-90 animals.

Dave had discovered an area that held about 3 boar, so we concentrated on that area when the pre-filming team arrived.  Signs were good and wallows had been used, and the crew waited from 3pm until dark to hopefully see them.  It wasn't to be.


But we believed it was just bad luck, and on the day of filming when Tom Heap arrived,  Dave took them back to the area.  New signs were there, but again they left without a look at a boar.  Finding boar can never be certain and the crew left saddened, as they were all looking really forward to catching sight of one - for personal reasons as much as professional.

We all had a nice day anyway and the chat about boar to the crew was stimulating and they were all interested as well as sympathetic to our side of the story.

Dave talked to them off camera about the population figures being propagandised by the Forestry Commission as outrageous, biased and scientifically flawed.  They agreed that it was very strange that a population of over 1,000 boar meant that 10-12 boar existed per square kilometre, yet after many kilometres walking and searching we saw nothing.

They saw nothing at The Rising Sun pub - a site the anti-boar locals claim boar visit every night.  They saw none on their drives around the roads, and when locals were asked for any any recent sightings they all said none.

On camera, Dave explained the hunting myth about predators and compensatory rebound effect - how numbers rebound back to normal, and often more, after rapid and unscientific culls.

He explained that the 360 boar killed this year were part of the ongoing compensatory process and cannot be a reflection of the total boar population.  This wasn't aired.

Also, Dave suggested that 75% of the cull were humbug coated piglets.  The Forestry Commission always attempt to dupe the public with cull numbers, preferring to give an impression that all boar killed are large adults as well as living all at the same time.  No.  Piglets are targeted ever more due to their ease of selling the meat to BBQs (the FC sells piglets direct to the public).

Dave predicted a glut of piglets early in the new year to the crew because numbers were now so low that increased shelter and nutrition left available for survivors meant that piglet mortality would be drastically reduced.  This wasn't a topic they wished to film.

Dave explained how the Forest of Dean couldn't support more than 400 boar, making the Forestry Commission estimate a joke.  He compared density of boar to Europe, which at similar latitude and tree cover holds constant at 3-4 boar per square kilometre (in ideal habitat).  This was not aired.

Dave explained his strategy that overcomes mismanagement and lack of knowledge on numbers.  Allow a core area to be a sanctuary for the wild boar, culling only the boar that leave the Forest each year using high chairs and marksmen on the Forest periphery.

Excess boar surviving the births in Spring increase the density of boar.  By Autumn this excess will leave due to overcrowding.  These boar are the ones surplus to The Forest, and if left alone will damage farmland as they spread outwards from the core sanctuary.  This was partly aired.

One other thaing that wasn't aired and purposefully ignored was the terrific amount of forest damage by tree felling vehicles.  The Forest looks quite ugly right now.  We are seeing the worst ground and tree damage by the Forestry Commission for years, and that is saying something!

What was aired, in fact, was a piece that had already been determined to agree with impossibly high numbers of boar, of the many signs we saw (we didn't see much!), of the 1-2 dogs per year that had been hurt because the dogs were harassing the boar, and of the local hospital repairing its dilapidated fencing.

This was The Dilke hospital, whose grounds had been rooted about a month before.  Boar had found the fence of the Dilke to be broken by a fallen tree - something the BBC crew had seen for themselves but didn't film it.  The boar helped themselves in of course, lured by bird feeders and fresh grass.  The Dilke, after 10 years of knowing about boar habits, didn't seem to care the fence had been broken.  Lesson learnt we hope.

As night encroached on the day of filming (you can see this in the final footage and the photo above), we decided to use a trail camera to catch a boar.  Dave took the camera back to the original site and was delighted to find that the boar prints he had shown the crew were that of a large and solitary male boar.  In fact, the footage was taken at about 3pm - the time we had first assumed the crew would have the best chance of a sighting!

All in all a good day but we are a little sad that a lot of truth about population and mismanagement was ignored from the show.  But they are the BBC after all (with a parliament to keep happy over license fees), and The Forestry Commission is a beloved quango of government.

Posted by Friends of the Boar at 14:03 No comments: