Since our last post on poaching, which some people may have taken with a pinch of salt, we now sadly report on a poaching incident in the Forest of Dean.

Last Saturday, the 12th May 2012, a Friend of the Boar came across the butchered and hidden remains of a sow he had been following for weeks.  The sow had been quite tame and so were the nine piglets she had with her.  They were also accompanied by another non-lactating sow, presumably too young to have had her own piglets.

She was a delight as were her piglets, and like the Beechenhurst Six last year, could have become a much loved presence drawing in tourists from far and wide.  It is interesting to compare her to the Beechenhurst Sow because not only did she look like her, but was known to wander in an area adjacent to Beechenhurst Lodge - is there a connection?.

Unfortunately her tameness was her downfall.  She appears to have been killed at very close quarters (details still required).   Her body was left, presumably on the spot where killed, minus her leg, and covered over with branches and rocks so has not to be discovered. 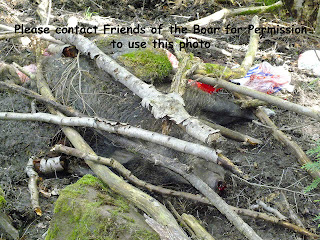 The person who had been following her had last seen her alive in that area the evening before her subsequent discovery in the morning.

What is remarkable about this story is the worry that there are people wandering the Forest at night with weapons, yet do not have vehicles nor the planning to remove a smallish boar wholesale!  Although expert at butchery, they seem otherwise at a loss with taking away the remains other than a leg!  It is the sort of stuff more akin to an SAS survival course whereby the meat removed was for personal consumption rather than to sell.  The taking of the life of a boar with dependent piglets seems of no moral consequence to them.  Who knows the real minds of these sick and obviously intellectually-challenged people?

The person who found the sow immediately called the police.  They arrived at the scene, and although too squeamish to touch the body, at first attributed the death to a road traffic accident and appeared disinterested in pursuit of a poacher (the fact a leg was missing seemed unimportant to the officer in question).  The police  officer took photos and called for the FC to come and remove the body, which they did later that Saturday.

So yes, the killers had left the boar there all night having removed just a leg.  The boar remains was about 500 metres from the road and would not have been difficult to transport by 2 men.  They clearly did not want the rest of the animal.

The police and Forestry Commission have today released a document (click here) stating that indeed, they now believe the sow to have been killed illegally rather than run down by a car.

Clearly, these people would not have been able to kill if the boar had not been tame.  The tameness may be inherited behaviour, but these boar would quickly revert to wild and nervous if left alone.  People who feed the boar are ultimately giving the boar a death sentence when people like the perpetrators of this cowardly poaching are at large.

We are all united now, the police, the Forestry Commission and Friends of the Boar in condemning anyone who feeds wild boar.


﻿
As we speak, the piglets are still alive and being looked after by the other sow.  Let's hope they learn to avoid humans!