Yes, it's been some time since the last posting, primarily because the closed-season provided little controversy!

In these few months we haven't rested but the opposite.  Friends of the Boar has grown in stature and now boasts many hundreds if not thousands of followers and supporters.

Please note that the voluntary closed-season is coming to an end.  We have had a whole year without a cull - something to really celebrate!

Just as we predicted earlier in the year, including on this blog, when shooting stops so does piglet production and eventually less and less "tame" boars.  Hardly any newspapers have received letters of complaint or worry about the boar this year, and yes, as we predicted, road verges are no longer taking the hammering they did only one year ago.

As we approach a new birth season for all the first time sows, expect a little increase in "verge activity" soon, and with it the usual moans and groans of people who only drive around forest roads, blind to the litter in the grass and the oft total destruction of forest rides by logging operations.

Since our last posting about the poached sow, many people came to the wild boars support.  The piglets seemed to survive well for some time, sometimes becoming roadside attractions.  The group appeared to split about a month after their mother died, with one group going missing, presumed dead.  But the good news is that a group of four occasionally makes an appearance, all grown up now having lost their stripes.

What is more, due to the message of not to feed them eventually percolating through to most people, these piglets learnt to rely on their instincts again and stay largely away from humans. 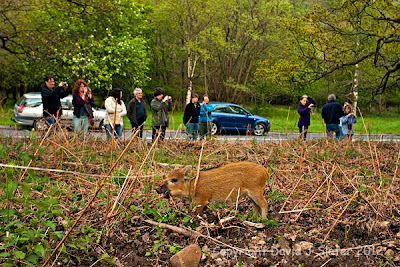 Sadly, since this poaching incident, we have noticed a conspicuous rise in "dubious" vehicles driving around the forest at night, with some vehicles even becoming stuck.  They have been reported to the police and the FC, but still the activity continues.  Please report any night driving activities to the police or to us please, ideally with reg numbers and descriptions of the driver.

Expect more from us shortly.... 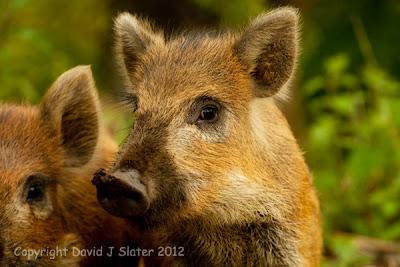 As the cull is due to commence this September and also due to pressure from FotB, the Forestry Commission and Gloucestershire county council have decided to form a wild boar liaison group.

Also invited to form part of this group is a forest Verderer, FotB and Dr. Martin Goulding; the UK's leading boar expert.

This is a massive step forward where this animals welfare is concerned in the Forest of Dean as there will be opinions, facts and recommendations from all sides. There will be compromises yes, but only in the animals best interests and FotB will now, for the first time have transparency where the management of this animal is concerned.

FotB will not commit to or accept a cull target unless the Forestry Commission can provide accurate figures of boar numbers at present. There will be no guess work and we will be asking them for evidence as to numbers if they do come up with a realistic figure. The first meeting has been scheduled for 24th August and we will keep you updated via the website and Facebook page.

FotB accept that the wild boar require management, however, what we do not accept is the fact that for many years this animal has been killed needlessly to meet the Forestry Commissions meat quotas, which has had nothing at all to do with the professional management of this animal. Like our deer, wild boar have no natural predators and for this reason we must control their numbers.
Our deer are only culled when necessary and some years they are given the luxury of a year-long closed season. Wild boar are very different to our deer as they have multiple offspring, when compared to the fallow deer, which have a single fawn each year. For this reason the deer management plan will have to be adapted to suit wild boar management but FotB are confident that this is possible and we will be working hard to see this put into practise.

As the majority of you are already aware, the feeding of wild boar in the Forest of Dean has become an ever increasing problem and we have been working very hard to get the message over that this extremely bad practise can and usually does end in tragedy. By feeding these animals we take away their natural fear of humans and this results in them approaching people for a free hand out. This alone can cause serious problems, especially if they approach children, the elderly and dog walkers.
Poaching is also an issue in the Forest of Dean and by habituating these animals we are handing them to the poachers on a plate as the boars will frequent feeding sites regularly waiting for food. If you are wondering what harm could be caused from losing the odd boar to poachers; the answer is simple. Every year suckling and weaning piglets are orphaned after the mother is poached. The piglets then slowly starve to death as the poachers will not hold back just because the sow has young present; they are in, shoot to kill and out as quickly as possible!

Please help us by getting this message over and remember, helping ONE animal will not change the world, but it WILL change the world for that one animal.
Posted by Friends of the Boar at 13:02